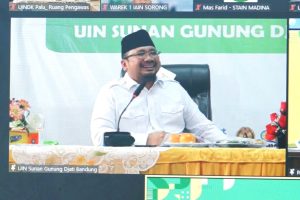 The SSE UM-PTKIN was held simultaneously online from a number of PTKI campuses and lasted three days, 14-17 June 2022.

“The selection of new students is a process that must be passed and carried out properly and professionally. I hope that the entire committee can oversee and ensure that the UM-PTKIN Exam goes well and smoothly,” the Minister of Religion ordered in Bandung, Tuesday (14/6/2022). ).

The Minister of Religion appreciated the development of the quality of PTKIN. According to him, PTKIN is now the community’s main choice to continue their studies.

“Now and in the future, PTKIN is no longer an alternative option,” He stated.

The Minister of Religion also appreciated the implementation of UM-PTKIN in 2022. Gus Men, as he is known, admitted that he has seen many innovations made by the national and local committees to succeed the new student admissions process (PMB) at PTKIN.

“Thanks and appreciation to the national and local committees for the implementation of the UM-PTKIN SSE which will be held online on June 14-17 2022,” he said. 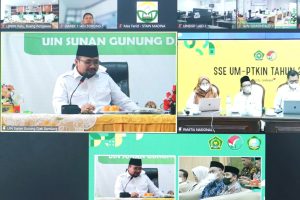 “This is a joint effort, hopefully it will be successful, and bring goodness to the world of education at PTKIN,” said Ali Ramdhani

The Rector of UIN Sunan Gunung Djati Bandung who is also the Chairman of the PTKN Rector forum, Mahmud, expressed his gratitude and appreciation to all national and local committees for the implementation of the 2022 PTKIN SSE UM.

“This is extraordinary, especially the Minister of Religion, Gus Yaqut, is pleased to be present to witness it live at UIN Bandung,” said Mahmud.