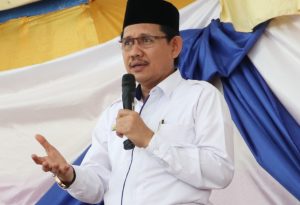 “Aspects of improving the order of social and cultural life, as well as the growth of the economic aspect, cannot be separated from the mobility of the community or population. The movement of each individual and human group simultaneously has a significant impact on social values ​​and economic improvement,” said Prof. Sagaf when contacted from Palu, Wednesday. (11/5).

Mudik activities and the movement of people traveling to other cities during Lebaran 2022 are claimed to be higher than similar activities before the 2019 pandemic. The 2022 mudik is also said to have a positive impact on the regional economy.

On the economic aspect, according to Prof. Sagaf, mudik or returning to hometown at a certain momentum that is carried out simultaneously becomes a show of prosperity.

“Mudik travelers  who return to their hometown, will certainly try to show increased prosperity to their family and friends back home. Usually travelers who have been successful in the city, when they return, of course, will bring along their vehicles, money and other things,” he said.

Because of that, said Prof. Sagaf, going home if managed well, will be an effort to approach socio-economic equity.

“Every traveler will certainly bring enough money which will then be spent on his closest family in his hometown. This is an opportunity to be managed with good management, in economic equality,” he added.

According to Prof. Sagaf, the activity of mudik can be a source of contributors to increase the circulation of money in the region or at home.

“On the other hand, it also has an impact on building friendly relations between fellow humans and families in their hometowns,” he said.

The establishment of good communication and friendship becomes the assets to maintain the values ​​of local wisdom that already exist in the hometown.

“So it is hoped that travelers can provide positive information for families in their hometowns, in terms of counteracting the negative impacts of modernization experienced in the city,” he said.