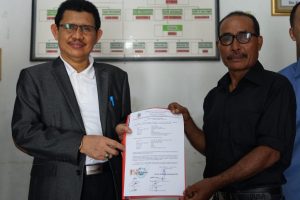 Prof. Sagaf explained that religious moderation can be said as a moderate way of religion, to avoid extremism in religious practice.

While at the theological level, he said, everyone has the right and should believe in the truth of their religion, but at the same time, at the sociological level, they must understand that other people also have beliefs in their religious teachings.

Religious moderation is an approach to increasing religious insight which is expected to have an impact on thoughts and attitudes as well as efforts to make religion the basis and principle to always avoid violent behavior, find a middle way that unites all elements in the life of society, the state, and the nation.

“Including people in transmigration areas such as Minti Makmur Village, Donggala Regency. It becomes a priority as it becomes a fostered village of UIN Datokarama,” he said.

In addition to religious moderation, UIN Palu, said Sagaf, also provides understanding to the public about gender to suppress cases of gender-based violence, as well as suppress child marriage.

“This is done by the Center for Gender Studies at the Institute for Research and Community Service (LP2M),” he said.

“This is fully supported by the government, one of which is the Minti Makmur Village Government granting an area of 80 x 100 square meters to become land for women’s empowerment in the agricultural sector,” he said.