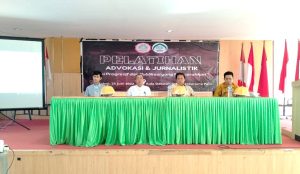 Palu (PR) – Consultation and Legal Aid Institute of the Sharia Faculty of UIN Datokarama (LKBH FASYA) provides free legal consultation services for people seeking justice in the area of ​​Central Sulawesi. Since it was first established in 2015, LKBH has become one of the middle class Legal Aid institutions in Sulawesi which until now still exists by adhering to the principle of free legal services to the community regardless of social strata, race, ethnicity, and even religion.

The enthusiasm of the community is reflected in the number of local people who often stop by at LKBH FASYA bringing legal problems they are facing to be consulted with several Sharia Faculty Lecturers who are members of the management of LKBH FASYA, not only disputes related to inheritance such as divorce and Sharia Economic, LKBH FASYA handles many disputes in the field of Positive law such as land disputes, criminal cases, to electoral conflicts.

LKBH FASYA lead by Drs. Suhri Hanafi, MH. who is also a lecturer of Civil Law at the Sharia Faculty of UIN Datokarama Palu when met on June 25, 2022, said, “The FASYA LKBH program has been around for a long time. We are committed to carrying out community service activities by building the rule of law, assisting as well as providing an understanding of Positive Law and Islamic Law to all levels of society regardless of status, social strata, race, ethnicity and religion.”

In addition, LKBH FASYA has the responsibility to provide Legal Aid training to Sharia Faculty students at UIN Datokarama Palu through the Paralegal Training Program which is held every year which aims to train students’ abilities in providing legal advocacy and consultation.

He further said that LKBH has many lecturers who are experts in not only the field of Islamic law but also in the field of Positive Law. Besides, LKBH has several experienced advocates / lawyers and some of them specialize in handling certain cases by holding the principle of professionalism and always maintain the credibility of the institution,” he said.

In a different place, the Rector of UIN Datokarama Prof. Dr. Sagaf S. Pettalongi, M.Pd. on June 25, 2022, said “We, as leaders, really appreciate the work program of LKBH FASYA UIN Datokarama because it has provided legal assistance for the community, especially in the city of Palu which has legal problems, this is an extra point for this institution in terms of dedication to the Public Community. In line with that, he also conveyed that the existence of LKBH was a proof that UIN Datokarama Palu was not only a place to gain knowledge but also a house that protects the entire community,” he said.

He also expressed his hope that if LKBH FASYA could provide more convenience not only for people outside the campus but also for campus residents, in this case students and lecturers, to get justice through consulting services and legal assistance.

Yuyun Andiani Agus, who is a 2nd semester student in the Family Law Study Program of UIN Datokarama Palu responded “We first entered as students of UIN Datokarama Palu, not knowing the existence of this LKBH but after starting lectures at the beginning of second semester, we were invited to learn firsthand to see how LKBH carries out its role as a law enforcement agency including the procedure for accepting cases, dissecting cases by the team, to the legal process of advocates in court and how the mediation process was carried out by the LKBH team FASYA which presents principals”.

Furthermore, Yuyun hopes that the existence of LKBH FASYA can form and produce law graduates, ready to answer challenges in the legal world.