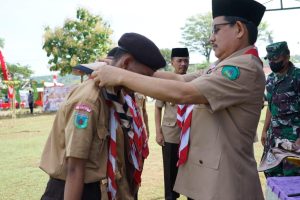 This event was opened directly by the Rector of UIN Datokarama Palu. In his remarks, he expressed his appreciation for the event that the scout movement meeting camp is a forum of friendship between the Regency Council (Kwarcab) of the scouting movement in Central Sulawesi province. The Scout Master of RKH UKM Scouts of UIN Datokarama Palu, Wahab, explained that the implementation of the 11th Scout Movement Meeting Camp has been carried out since 2010.

“The participants were from Central Sulawesi, there were 7 Kwarcabs, 50 Groups, around 50 supervisors. We estimate the total number is around 800 people,” said Wahab.

“This is our annual agenda, this Meeting Camp is the 11th. The last 2 years, we couldn’t do it due to the pandemic. 7 Kwarcabs including the scout kwarcab of Sigi, Palu, Donggala, Parimo, Poso, Ampana, and Luwuk,” he continued.

He added, this time, the event  also prioritized the agenda of the annual programs implementation that had been prepared. There are several series of activities that must be followed by participants such as art performance competitions, traditional cooking competitions, seminars, and tree planting social services around the location of campus 2 UIN Datokarama Palu, in Sigi district.

For the competition itself, there is a scout skill competition, starting from the semaphores, the code, then scouting gymnastics, plus an Art Performance, as well as a traditional cooking competition.

“We invite SMA/Aliyah, SMP/Mts in Central Sulawesi. One of the goals is also to introduce the UIN Datokarama Palu campus, ” He said.

“It will be carried out for five days and will be closed on Saturday,” concluded Wahab.